This research follows from our earlier work on this “species”, good old Atypoides I, also published in Molecular Ecology.  Many new insights in this paper – more gene data and much denser geographic sampling allows us to resolve what appear to be eight cryptic species and many really neat Californian biogeographic patterns. The neatest is perhaps the unexpected “trans-valley” connections that we find between spider populations north of Sacramento, and those down near Monterey.  In at least one clade the patterns are pretty crystal clear.  I’ll let you read the paper to learn how this pattern may have originated.

Our work continues on this group, as we’re now writing papers about fine-scale biogeographic patterns in the Bay Area, and papers to formally describe the cryptic species.  To quote from the paper: “Burrowing mygalomorph spiders are roughly analogous to immoveable objects (e.g., rocks) in an evolving landscape. These objects themselves move very little, but are sometimes carried passively by external forces.”

And to quote from Norman Maclean – “Eventually, all things merge into one, and a river runs through it. The river was cut by the world’s great flood and runs over rocks from the basement of time. On some of those rocks are timeless raindrops. Under the rocks are the words, and some of the words are theirs. I am haunted by waters.”

Ha, I am haunted by giant mygalomorph spiders 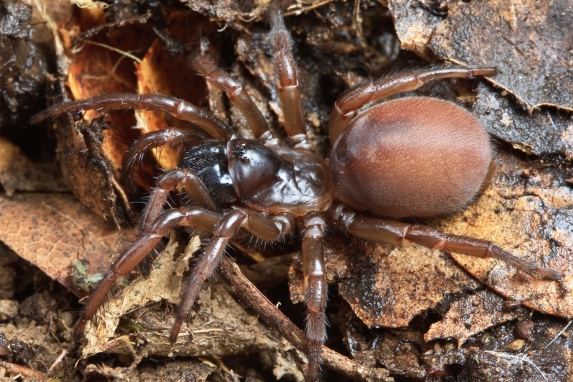 University Professor, teaching college students about biological diversity & evolution, conducting original research in the realm of arachnid systematics
View all posts by marshalhedin →
This entry was posted in Uncategorized. Bookmark the permalink.